The Lady of Shalott and my Drowned Garden 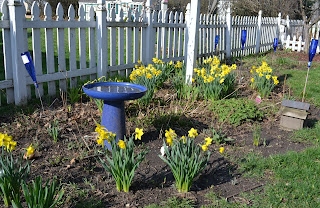 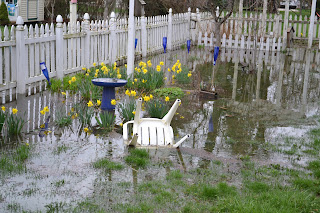 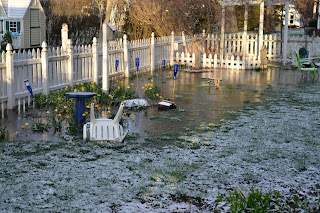 Dear Readers,
So here are the photos of my drowned garden. It was just late week that I sat on the white chair and recited Daffodils to you by Wordsworth. The following pictures were taken just days apart. First came five inches of rain which flooded my gardens, (let alone my old cellar!), then came the ice and snow.
Just when I thought I was safe...you know, water gone, ice thawed, here came the rains again. I could not post another daffodil garden as it is once again under water and the fleeting snow of the day. My garden lives at the mercy of our long lost spring. I believe they cannot survive this last bout of weather.
As I stood looking out my kitchen window today, my mind went immediately to Alfred, Lord Tennyson. (1809-1892) He was born in England and attended Cambridge University. He became a writer as he feared the gloom that might follow him from his father: epilepsy, alcoholism, violence, and madness.
His story is long and complicated as are all of my featured poets this month. He did eventually become the poet laureate of England for a half a century...not bad for a country boy of eleven children.
My favorite poem is The Lady of Shallot, famous by Anne of Anne of Green Gables. Enjoy!
The Lady of Shalott
by Alfred, Lord Tennyson
Part 1
On either side the river lie
Long fields of barley and rye,
That clothe the wold and meet the sky;
And through the field the road runs by
To many-towered Camelot;
And up and down the people go
Gazing where the lilies blow Round an island there below,
The island of Shalott.
Willows white, aspens quiver,
Little breezes dusk and shiver
Through the wave that runs for ever
By the island in the river
Flowing down to Camelot.
Four gray walls, and four gray towers,
Overlook a space of flowers,
And the silent isle embowers
The Lady of Shalott.
﻿
Posted by Lou Ann Homan at Wednesday, April 24, 2013