My hometown at dusk. 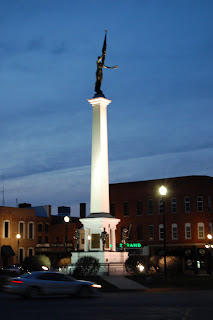 On Wednesday evening I participated in Take Back the Night, a nationwide event against sexual violence. (See this week's column in the Herald!!) The moon was so beautiful rising over the Herald Republican, and I had forgotten to take my camera. So, Kathy and I went walking at 8 last night to wait for the full time to rise for a photo shoot. We walked around the square so many times I thought the police would pull me over for questioning, except I know all of them and they know me, so alas.

I took this photo while waiting for the moon to rise. I think it is a spectacular picture of my hometown at dusk. It was good I took the photo as the sky grew cloudy and covered the beautiful full moon. I never did get that picture, but then again photography is often about surprises!

A little trivia from The Farmer's Almanac. The April Moon is also known as the Pink Moon referring to the wild ground phlox cover that is the first of the wild flowers to bloom. It is also known as Sprouting Grass Moon, Egg Moon and Fish Moon.

Whatever you call it, I hope you were able to see it from your little spot in the world!

Lou Ann Homan-Saylor is a teacher, a writer, a storyteller and an actress. She lives in Angola, Indiana where she can be found meandering around looking for a great story or just writing late into the night by the light of her red frayed lamp. She also is the co-author of the new blog, voiceofangola.blogspot.
Posted by Lou Ann Homan at Friday, April 10, 2009