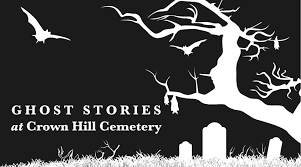 It is mid-October, and my plethora of ghost story books come tumbling off the shelves. Literally. Stacks of them weave in and out among the orange twinkle lights casting shadows known only to me.

Where did my fascination with ghost stories begin? Girl Scout campfires? Late night stories with my Dad? On the other hand, could it just be my own fascination with things not explained? Halloween was always my favorite holiday (if you could call it that) when I was a kid, and it still is my favorite. Autumn has always been my favorite season with cascading leaves onto the forlorn zucchini plants and the mums fading away. Candles. Campfires. Quilts on the beds. Ghost stories.

Today Kathy and I load up Lola (my red Jeep), and head down to Indy for the annual Ghost Stories in Crownhill Cemetery. It will be a quick trip with conversation and anticipation for the concert tonight. I have not been to Crown Hill for the past two years due to family obligations, but this year, not only am I a storyteller, but I am the last one of the evening. That alone sends shivers down my spine. I am also the emcee for the RIP reception as we auction off hand-painted pumpkins to raise funds for Storytelling Arts of Indiana.

Crown Hill Cemetery is the third largest non-government cemetery in the United States. It lies in the northern part of Indianapolis. The acreage is 374 with more than 190,000 resting souls inside the beauty.

The first burial in Indianapolis was in 1821 when a Pennsylvania Dutch merchant died. They carried his body to a location close to the river bush whacking their way to the burial. In 1862, Confederate soldiers were housed at Camp Morton in Indianapolis. The conditions were unbearable ending in the deaths of 1,762 Confederate soldiers from dysentery and smallpox. They, too, were buried in Indianapolis. Their graves were dug by Weaver and Williams. These two men also furnished the wooden coffins at $3.50. (Someday I need to check out those stories!) The city began to realize they were filling up with folks who would eventually need a cemetery so land was donated/purchased to build Crown Hill. It began as Strawberry Hill, but soon Crown Hill became the name because of the high point. A governing board of 30 directors witnessed the dedication on June 1, 1864. It took folks a full day to travel to Crown Hill by horse and carriage, and yet over 400 came for the dedication. They were concerned folks might not travel so far for burial. They were quite wrong with those assumptions!

The first burial in Crown Hill was Lucy Ann Seaton, the young wife of an army captain. She was struck with tuberculosis. Her gravestone reads, “Lucy, God grant that I may meet you in Heaven.” It has since become home to many famous folks such as Benjamin Harrison, James Whitcomb Riley, Booth Tarkington and John Dillinger.

Tonight I will walk upon the stage built in the center and tell stories to over a thousand folks spread out on blankets and chairs, bundled up for the cold temperatures. It will be magical. It will be dark, encompassed within the cemetery as I tell stories I have painstakingly chosen, researched, and rehearsed for this occasion. I have to admit, few things make me happier than taking hold of the microphone!

When the night ends, Kathy and I will quickly exit so as not to be locked into Crown Hill, as was the case a few years ago. I actually got lost on my way out. For some strange reason, I locked the doors of my car and had to call for help. I hope that we will exit immediately. I will once again be grateful that I am able to leave the cemetery wishing the sleeping souls a good night.

I am honored and humbled to be a storyteller within the gates of Crown Hill, the most beloved cemetery in the mid-west. Beauty abides within the rolling hills, the nature preserves, and the markers of those gone before us.

As Emily Dickinson once wrote, “It seems as if nature had formed the spot with a distinct idea of it being a resting place for her children.” 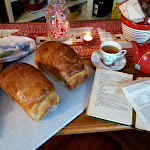