November's storm with a little poetry!

Ah, so the weekend's storm came as a bit of a surprise. There were a few inches predicted, but as the day wore on, the forecast changed and the accumulation began.

I was to have gone to Detroit to visit the Museum of Art, but something told me the weather would deteriorate, and I would be stranded somewhere in Michigan. I was right!

By early evening,events were canceled in town, the toll road closed, and it looked like a snow globe out my windows.

I had a call in the early evening from a young couple traveling west from Vermont to Idaho, but couldn't get through. Yes, I had a room for them, and yes, come on over. It was fun letting them in and sharing travel stories. I had a feeling that someone would need shelter on that night.

We had a record low of 11 degrees last night, and it was late in the evening when I realized I had not shut off the outside valve for the hose. Hopefully I saved myself some frozen pipes.

By dark last night I put on my winter cleats (how did I survive without them?) and crossed the street to my neighbor's house. We sat and chatted until the candles burned low eating a late night supper which is always my favorite.

Here are a few photos from the weekend. They were all taken from my front and back porches! 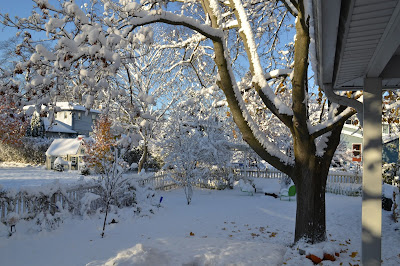 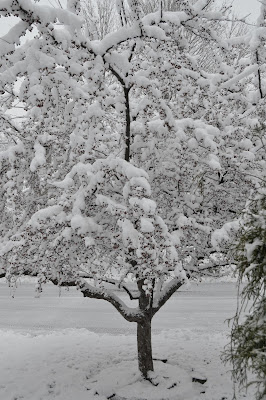 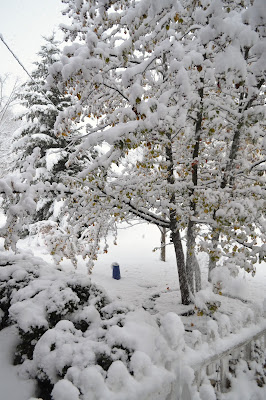 During the storm I entertained myself quite nicely. I finished a library book, practiced on my ukulele, made soup, and watched reruns of Downtown Abby! I also read poetry and worked on my on-line class from Yale...seriously.

I chose for you a poem from Hailstones and Halibut Bones by Mary O'Neill. It was originally published in 1961. Each color poem is a delight. I chose white for this day, of course!

White is a dove
And lily of the valley
And a puddle of milk
Spilled in an alley--
A ship's sail
A kite's tail
A wedding veil
Hailstones and
Halibut bones
And some people's
Telephones.
The hottest and most blinding light
Is white.
And breath is white
When you blow it out on a frost night.

White is the shining absence of all color
Then absence is white
Out of touch
Out of sight.
White is marshmallow
And vanilla ice cream
And the part you can't remember
In a dream.
White is the sound
Of a light foot walking.

White is a pair of
Whispers talking,
White is the beautiful
Broken lace
Of snowflakes falling
On your face.
You can smell white
In a country room
Toward the end of May
In the cherry bloom. 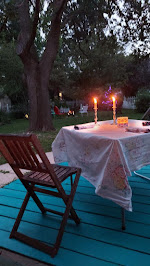