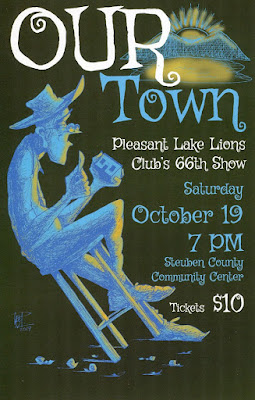 “Do human beings ever realize life while they live it?-every, every minute?” is a line from Our Town written by Thornton Wilder. Most of us know the play through a high school performance or lit class. Some of us even have a dozen copies of the play on their bookshelf (okay, I do) waiting to direct the play in her hometown. And some of us think about it often, as I also do.

The play, Our Town, was awarded the Pulitzer Prize in 1938. It was a stark and original play with no curtains, no scenery in the fictional town of Grover’s Corners. Wilder chose this simplicity so audiences could put their own town into the scene. I remember the first time I saw the play. I was still a kid and my dad took me to see it. Was it transformational then as it is to me now? Maybe or maybe not. I do know I think about it every day. I think about it every time a guest or a friend says, “You are so lucky to live here.” I love to laugh and say, “Oh, not luck, my friend, it was and is a conscientious choice.”

This weekend we have a chance to experience our town on a personal level. Tonight is the Pleasant Lake Lions Club Variety Show (aka the Minstrel Show). This show has graced stages in Steuben County for more than sixty years with just a short hiatus. I became aware of the show because of Elten Powers. He has been the director of the show for ten years.

Elten came into my life about that same time when I was writing and directing the shows of Angola. My leading man became ill when my hairdresser, Mary Ramsey, said, “Call my uncle, Elten, he loves that kind of thing.” I had no idea who he was, but indeed, I did call. He answered. The rest of our friendship is history, along with his wife, Carolyn.

Elten took over the directorship of the show. Every year starting in July, he begins the search for songs, themes, and the core of the show. By early September, the guys are meeting and learning the songs every week. This year the theme is Our Town. Oh, not the show by Thornton Wilder, but indeed it is the theme of the show. Small towns. Gentle towns. Elten has followed the rules of Wilder with no curtains and no scenery. I was able to get a peek at the show (okay, my band the Genuine Pretenders) will be playing in the show), but aside of that, oh wow. You will know and love all the songs and be singing right along in your seats.

Included in the show this year is a performance by Allie Ryan and Josh Ayers. They will be closing the show with a song written by Iris Dement. I can’t say the name or I will give it away, but I will tell you it is a perfect ending for this show. Allie is able to sing as the song was written. The Mayor has a solo tonight too, but my lips are sealed!

I think this show gives us time to reflect on what we really have here in this town…and surrounding towns. It is said to always “smell the roses,” and that is good, but let’s make sure we take time to see our neighbors, watch the children, listen to the church bells, and take in the scent of Autumn.

It is rumored that Elten will end his directing at the close of the show tonight. I don’t know how you might feel about that (or did you know?), but I find endings quite sad. Elten wants to put his time and effort into his new museum as he continues to leave a legacy for the folks in Pleasant Lake. I want to thank him for his hard work. I have had so much fun joining up with the Pleasant Lake cast the past few years as Minnie Pearl, Lily Tomlin, the Bride of Frankenstein and many other roles.

Our Town is the first play the newly formed theatre will bring to you so stay tuned for that!

In the meantime, come out to the show tonight…say “hi” to your neighbors, give Elten a big thank you, and as Thornton Wilder said, “Let's really look at one another!”

Show starts at 7:00 in the Dale Hughes Auditorium. Come early to get a good seat!