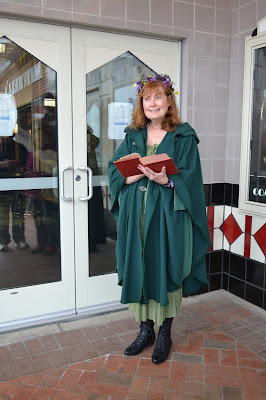 Here I am getting ready to read Sonnet #154 of Shakespeare!

It started as just an idea, maybe not even an idea, maybe a fleeting thought. My great friend, Carolyn Powers, sent me a note from Atlanta that she met the Bardess of Atlanta who was reading all the sonnets of Shakespeare on the beltway on Saturdays. I loved the idea, and even though it was just February, I decided I could do this in April.

I had to get permission from the city (to keep the crowds at bay!), and I discussed it with our lovely Brokaw Movie Director. They agreed to showcase a Shakespeare film every week in the theatre.

I posted on Facebook, I talked it over with friends, with my book club, well, with anyone who would listen, and the month began. I was the Bardess of Angola.

The idea was to read all the sonnets of Shakespeare on the Square at 4:00 every day, and we did. I was there for 26 out of the 30. Four days I was on the road with storytelling and passed over my lovely Shakespeare book to friends who carried on without me.

I used my Dad's Shakespeare book making notations as we went on. Someday someone is going to wonder what that was all about!!

There were days the crowds were few and twice I read to myself out loud flinging my arms in the air, but it didn't matter.

Yesterday a few folks braved the weather...rain, wind, and a winter's gale were upon us, but we finished the sonnets.

Cheers to a small town for letting me do what I love and cheer to all who came to listen, who read, and who supported this crazy idea.

As for me...April has been a whirlwind and so I say...welcome May!