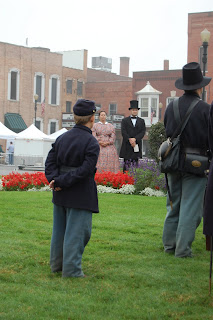 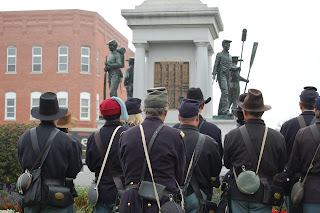 Union Soldiers listening to the President. 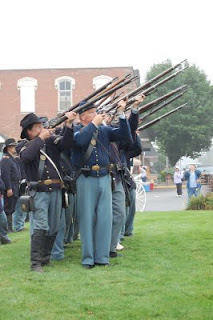 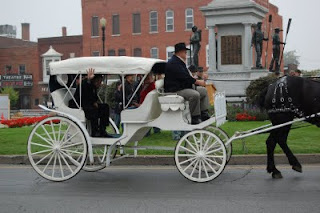 President Lincoln leaving for the battlefield.

Every year the last week end of September, Angola rolls out the carpet for crafters and musicians, civil war re-enactors, and yes writers and photographers.

It is one of our chances to connect with our community, visit with folks, and eat German almonds along side pork sandwiches and cotton candy.

This year had a new twist as Abe Lincoln came to town early on Saturday morning. To be exact, the carriage rolled in at 8:30. It was a foggy, misty morning as the streets were all blocked and waited for the President. The Union troops were gathered around the Civil War monument for Steuben County as they were preparing for battle.

I took Matthew and Jonah with me and spent a great deal of time telling them stories and helping them understand that the real Lincoln was killed and this man was a storyteller Lincoln.
They were also a bit worried about the guns. However, they didn't move as the event began. The fog pulled the noise level down to a hush as we listened to the speeches, the gun salute and taps. It was a very moving experience for all, and I believe not a dry eye on the town square.

Following this event, the Lift off for Literacy sent off thousands of balloons in the air in our fight for literacy in our county.

The stages were full all days of local performers. I had a one hour show on the children's stage along with the pie eating contest, which I did not win. I didn't even come close!

The evening ended with a square dance out at the park. It was the perfect night with just a sliver of the moon peaking through clouds...warm enough to dance without gloves or hats, cool enough to add sweaters. There was a group of us dancing until the last waltz. Later that evening I visited the camps. Today was another full day. I left my house on my bike early and really just barely walked in the door. I could not pull away. Tomorrow's blog will feature more photographs. Until then...
Posted by Lou Ann Homan at Sunday, September 27, 2009 No comments: