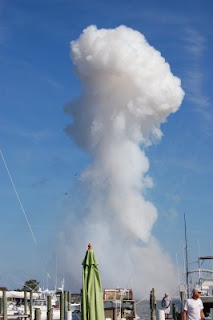 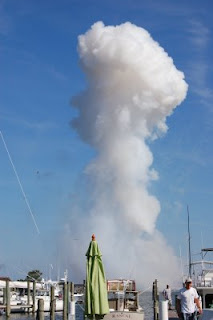 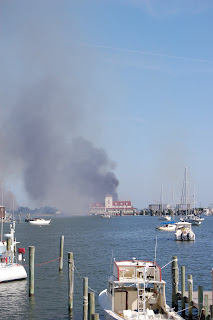 It started out as a beautiful July 4th morning. Woke up early, had homemade toasted bread with cherry jam and hot coffee. There were still last minute details to finish on the float, but I could not let the morning pass me by.

I picked up my camera and went off to take photos of flags. There are all over Ocracoke Island, draped over bushes, in flower gardens, hung off old homes. I had biked down to the harbor to photograph a few photos of the boats in the water when the explosion began. The sky was filled with fireworks and I was in such a daze I didn't realize what had happened. I know I stood there stunned for at least a minutes, then it was as if the entire sky was falling with all the fireworks exploding at once. As the sky filled with smoke, the sound of the ambulance was in my ears.

I was able to recover quickly and take the first shots of the explosion. Crowds began to gather with fear in their eyes.

Four flight helicopters came, but took 45 minutes to an hour to reach the Island. They did not land on the landing pad, but rather in the parking lot side by side. The ferries were all shut down and those ready to pull into the harbor for the day's celebrations were sent back for another two and a half hour ride back to the mainland.

We do not know what was the cause of the explosion, but we do know one was killed and four are critically injured. Two local firefighters were taken off Ocracoke Island due to heat and exhaustion.

Of course everything was canceled for the day. A subdued hush has fallen on this small piece of ribbon to the sea. Quietly we all took our photos and our memories home to our cottages.

My day was only beginning as I sent my photos to WINT in North Carolina. Within minutes my phone was ringing to give permission and interviews for CNN and NBC.

It is amazing that the day is still beautiful with just a faint touch of smoke in the air. Firework debris is spread all across the harbor. I leaned down to pick up the end of one.

A moment can change our life forever.