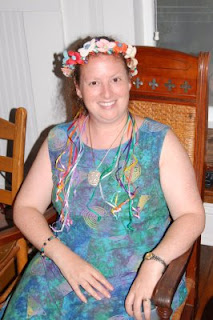 Miss Katy as the Solstice Queen!

On Saturday evening (the eve of the Solstice) Philip and I hosted a Solstice pot luck! The guest list continued growing and if you were left out, please accept our apologies.

Philip's daughter, Amy, baked a traditional Island Fig cake in which I hid a small seashell. He or she who found the shell in the cake would become the Queen or King for the evening. There were several men who chose to eat other desserts until the Queen was crowned!

It was a delightful evening with new twinkle lights on the big screened in back porch and food spilling over two tables. Folks were still telling stories at the Midnight hour as we were all just too happy being friends, being together as the Earth begins its descent back toward winter.

Happy Solstice to all,