Earth Hour and The Game of Love and Chance... 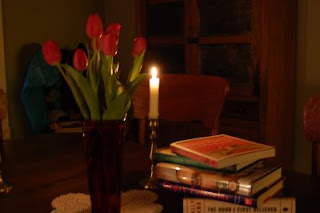 By 7:00 in the evening, I shut off all the lights in my cozy house including the small little window lights and gently soften the midnight hour. I wanted to participate in this event right along with the Empire State Building and the Golden Gate Bridge!

The only problem awaiting was the fact that I was leaving during the appropriate time. After shutting down the electricity, I picked up my umbrella and walked to Trine for the spring drama of The Game of Love and Chance. The event was held in the small Wells Theatre seating a hundred of so.

I took a seat in the front row leaving the duo seats for couples. (Does everyone come in couples these days??)

The show was wonderful including the open windows that boasted the oncoming storm and rattled the old windows.

I was so close that my knees were actually touching the stage! After giving my congratulations to the cast and crew, I took to the darkened streets.

I arrived home to a very dark house. I lit a few candles, took a photo or two and decided that the hour was past (well, it was almost ten) and turned on the lights. The evening gave way to heavy storms during the night which did, indeed, blink those lights a few times, but sleep finally gave way.

Today the snow covers my crocuses, but alas, tomorrow the sun will shine.

Lou Ann Homan-Saylor is a teacher, a writer, a storyteller and an actress. She lives in Angola, Indiana where she can be found meandering around looking for a great story or just writing late into the night by the light of her red frayed lamp. She also is the co-author of the new blog, voiceofangola.blogspot.com.
Posted by Lou Ann Homan at Sunday, March 29, 2009 No comments: