The Winter of the Blue Snow 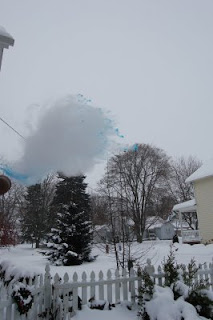 It has been the coldest on record here in Angola, Indiana. The wind chill was recorded at 44 below zero, although in town it was just 38 degrees below zero.

Everything has been closed from schools to libraries to shops. It has been cozy and certainly has given us all something to talk about!

Watching the news during this cold snap, the weather man was illustrating how boiling water tossed out into the yard would turn into snow. I was fascinated with this experiment and knowing that this cold may not come another time in my life time, I decided to try it out. I spent yesterday afternoon perfecting the tossing of boiling water. It was stunning. I told Abe (Portland, Oregon) about the experiment. He said to send a photo...but I thought...hmmmm...the snow won't show up. So, I decided to boil blue water instead.

So, early this morning (before any thought of warm up should happen) I summoned over my neighbor, Lee, to take a photo while I tossed lovely blue water out into the yard. Behold here is the photo. Isn't it lovely in my winter yard...blue snow!!

On the other side, my downstairs pipes froze up, but all is well now with no bursting of pipes and running water.

All in a winter's day.