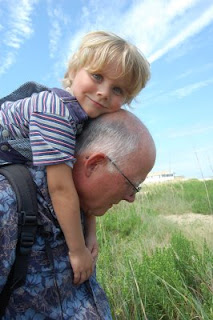 Philip and I took Lachlan on a field trip on Thursday up the beach. We strapped him into the back seat and away we went. It is interesting that he only knows travel by ferry...just common place to him! We went to Cape Hatteras to have our picnic.
There we sat.
The three of us...facing this majestic lighthouse as we chased away sea gulls and ate bologna sandwiches. We didn't tour inside as he was probably too small and we had many more events for the day, but we did stand side by side up next to the lighthouse. We could only sigh in awe of this masterpiece that, not only was built by the sea, but moved as well.
Off we went to Chicamacomico for a tour of the lifesaving station. It has been restored beautifully and, since it was Thursday, we also were able to watch the drill. (Well, that was the reason for the trip!)
The eight members of the Coast Guard hauled out the beach cart which weighs over a thousand pounds and completed the drill just as it was done a hundred years ago. I tell the story of this rescue operation, but had never seen it actually completed. It was much grander than I had anticipated, although I knew the mechanics of the drill.
When the drill was completed, the men of the Coast Guard answered questions as they were served cold bottles of water. Something the men of long ago were not privy too!
After dripping strawberry ice cream, Lachlan fell asleep and we all came back home drifting along on the ferry. I would say a good time was had by all!!
Lou Ann
Posted by Lou Ann Homan at Saturday, July 26, 2008 2 comments: