Yesterday afternoon a young fellow took Philip and me behind the Village Craftsmen...into the shadows and told us a ghost story. He said that he was walking early in the morning (3:30) and heard giggling and saw a child's footprint within his own. He thought it was just someone else walking on the beach...it was early and the shadows were too dark to see anything on the beach. He soon realized that he was the only one walking and that it had to be a ghost..a child from a shipwreck long ago. As he (to remain anonymous) told this story, he shivered and looked around him for ghost remnants, I guess! He said that he is a scientist and did not believe in ghosts until yesterday. So, I decided to go out at 3:30 on the beach to do a little ghost busting myself. Well...it was really dark at 3:30 so I waited until 5:30. I made a cup of tea and hurried to the beach to catch any last minute haunting. I guess I was too late, they had all gone back to wherever? Anyway, the morning was beautiful and I had a long quiet walk with my camera. These pictures are from my ghost busting morning on Ocracoke Island. 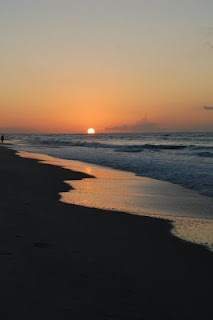 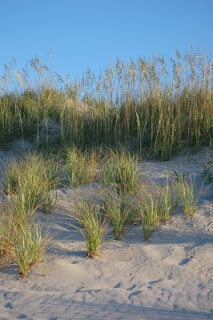 Instead of ghosts, I found dunes in the morning shadows. 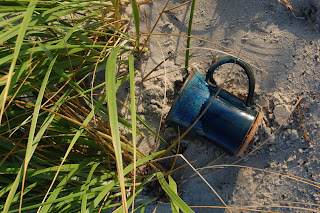