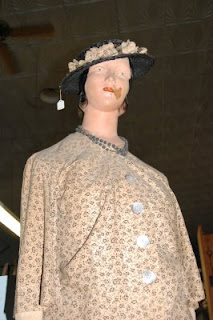 The alarm was set for 5 a.m. for Monday morning...I have moved past this 5 a.m. wake up call this summer, but it rang and we were up! It was still dark in the outside shower as I made my way down the wooden steps. With our satchels packed, and coffee in hand (at least in my hand) we were picked up by friends of ours for a day off island. It may not seem like a big event to most of you, but it certainly was for us as we do not leave the island very often. There were seven of us involved and we called ourselves the Hyde County tour bus for North Carolina.

We boarded the 6:30 ferry for our two and half hour ride to the mainland. We talked and read, some slept. I did some lovely photography of the sun coming up and we arrived at Hyde County. Now, not to be disrespectful, but there really are not too many tourist attractions there. We did, however, find a few! We were not onto the mainland five minutes when we stopped for coffee at a small restaurant...maybe I could call it that...where the coffee and food were great! There were two or three locals and they knew that we had come all the way from Ocracoke Island!!

We stopped at an old store boarded up and peeked in all the windows and visited the old church across the road. The door was open and we went in. It was old and echoed with time and stories. Someone began singing Amazing Grace and soon we were all just standing and singing. It was lovely and reverent and maybe my favorite part of the trip.

We continued to Bath, North Carolina where Blackbeard married his 14th wife and some historians even believe he was from that area as opposed to England. The town itself is so lovely, and so quiet. We had lunch in a small cafe that said 'closed' but were really open, even though we could not get anything off the grill!

We then toured the Belhaven Museum which Philip and I had toured last January and I wrote about it in a blog or article or Passage. It was the entire contents on Mrs. Way's home in 1962. It is all arranged over the police station and has not been cleaned nor dusted since 1962. It was dim and dark and hot and full of amazing artifacts from her home such as a one eyed pig, a 10 pound tumor removed from a woman in the 50's, a button map of the U.S., a dress from a 700 pound woman, canned fish from 1960...should I go on?

We took the 4:00 ferry back home to Ocracoke Island where we shared stories and laughed and did a little reading as well. My book for the day was Cannery Row by Steinbeck. Interesting choice.

Our cottage looked lovely and sweet after a day off-island....we had a wonderful time, but isn't it nice to come home?