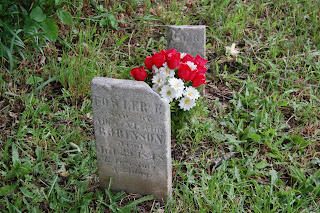 Peg picked me up yesterday for a day long field trip to our neighboring town of Orland, Indiana. Peg Dilbone is our county historian and we became friends a few years ago. She often confesses that she wishes she had a cot in the library. If I ever need Peg, I just walk down to the library and there she is.
She has been telling me about the wagon train grave ever since I met her, so yesterday was the day to visit. We traveled the rural roads into Orland, turning and twisting here and there following the lush landscape on this June day.

Finally we were there, and it was as amazing as I knew it would be. The grave had been mowed and a bouquet of plastic tulips had been placed on the grave. There is controversy about the story, but no one exists to ask so we can only go by research (of which there is none), family records and folklore.
The story is that the child died on the trail and was buried by the road, probably so the family could come back and find the child. The grave stone was replaced in early 1900 giving the child the name of the nearby farm owners. Here is how it reads:


Fowler Elias
Son of
Albert and Lovina
Robinson
Died July 29, 1848
Age 1 year 2 months
22 days
I took some photographs and then we moved on to the Underground Railroad which was prominent in Orland in the 1840's and 50's. It was a wonderful day...full of history, friendship, and reverence.
Posted by Lou Ann Homan at Wednesday, June 09, 2010 No comments: